Many of you have asked how S2 is doing so I am writing an update on him. (oh he will be sooooo thrilled to be the center of attention!) -not.

S2 is doing pretty well.  He made a few friends quickly and is making more very slowly. I would  say they are still firmly in the acquaintance category.  But his three or four friends that he made right away seem to be a solid group.  They eat lunch together, chat on Skype, and have even been out to a karaoke club!  The majority of kids here seem to go out a lot and have WAY more independence than we are used to back in the USA.  A neighbor is even letting her daughter go to Tokyo with a friend (no adults) for a week.  S2 is not really interested in going out very much and that is just fine with me.  Not having  grown up in this environment I think he would be in way over his head with the peer pressure and adult atmosphere of bars, clubs etc.  Dtr.  even says some 9th graders go out to bars and clubs!!  This will be happening in my house over my dead body 🙂

When S2 started high school in the USA my goal for the first year was that he should have people to say “hi” to in the hall and perhaps one person he called a friend.  He met that goal and even had a couple of people he referred to as friends.  For sophomore year he developed those friendships further and had a small circle he hung out with before school started.  He still made sure his class schedule was too full to include lunch so that he didn’t have to face that social chaos.  Then junior year he added a few friends.  He still didn’t go out with them much outside of school, but he was happy.  He even asked a girl out and had a very nice steady girlfriend.  They went to the Junior Prom and were so sweet.   So considering that it took him three years to develop firm friendships in a school where he had been with roughly the same group of kids since fifth grade, I am over the moon that he is doing so well here.  Most importantly he is happy.  He misses his friends and especially his girlfriend.  They Skype occasionally and he has access to Facebook at school.   – An aside….It is so weird that in the US they spend so much time making sure the kids don’t have access to FB or cell phones or youtube and here school is the one place they can do those things (before classes start in the morning)! –  S2 even had a short article about the moon cake festival printed in the school magazine.

So his really big news is that it is college application time.  He has written a really nice essay, filled out the common app, kept track of deadlines, and arranged for teachers to write letters of recommendation.  And all of this over two continents, two school districts, and several time zones.  This was not without prodding and some nagging but largely he did it on his own.  I am so proud of him.  I can’t imagine myself at 17 picking up my life, moving to another country, starting school -including two AP’s- ten days late and playing catch up, making new friends, and getting college applications together.  For those who don’t know, S2 had MAJOR writing issues and struggled immensley to complete two or three related sentences when he was in fifth grade.   To say he has taken a great leap forward toward being an independant  young man is an understatement.

So, in honor of S2 here is a picture of him hitting the ‘send’ button for the common app. and below I have included, with his permission, a copy of his essay. 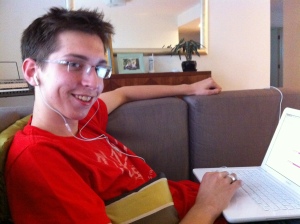 Look out world, here I come!!

I am an expat wife, mom, RN, felted and sometimes knitter moving from the Hudson Valley, USA to Shanghai, China. I have 3 kids. One is staying in the US to finish college and two are joining me on my adventures.